True End Training (TrueEnd研修) is a special produce mode added in December 2019, which as the name suggests, trains new players on how to do a true end in W.I.N.G. Completing the True End Training will give players a copy of the P-SSR that they chose at the start, as well as True End Feather Jewels. 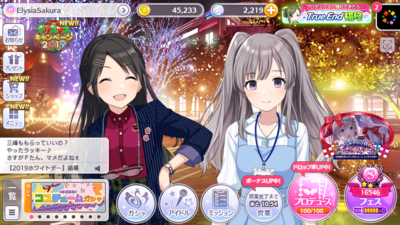 True End Training is pretty much W.I.N.G. but with certain modifications. In particular, you can choose which P-SSR they can produce. However, only the initial P-SSRs for each idol are available for this mode. A copy of the chosen P-SSR will also be the reward after completing True End Training.

Unlike in regular W.I.N.G., however, you cannot use your usual teams, but rather the game will automatically set up a produce unit consisting of the 4* uncapped version of the chosen P-SSR, as well as 5 4* SR supports. These supports are dependent on your chosen P-SSR and its primary stat. You also get two stat-specific trend magazines, which sets the top trend of an audition or W.I.N.G. semi-finals/finals to that magazine's stat. The trend magazine's stat is also dependent on the P-SSR you have chosen.

After all this, W.I.N.G. will proceed as normal, but with a few additions. For instance, there are now recommendations that you can do which can help you obtain the true end. Note that these recommendations do not give out rewards, and you can choose to ignore them if you want to. Here are the list of recommendations per season:

Retrieved from "https://shinycolors.wiki/w/index.php?title=True_End_Training&oldid=23345"
Category:
Cookies help us deliver our services. By using our services, you agree to our use of cookies.