Producing Idols is one of the three main things players can do in Shiny Colors, the others being Fes and sending support idols to do work. The overall goal for these produce runs is to produce an idol and help them become Fes idols, to be included in Fes units. Each produce run costs 30 stamina to start. Stamina refills at a rate of 1 stamina per 5 minutes or through use of a stamina restoring item. These produce runs also unlock card-, idol-, and scenario-specific commus between the idol and the producer, as well as card-specific commus for your chosen support idols, all of which delve deeper into the character of the idol.

There are four produce scenarios. Click on an icon to proceed their respective page.

Besides these normal produce modes, there is a special True End Training mode which enables players to do a true end and get a free copy of a chosen P-SSR. It can only be cleared once and will disappear as soon as the true end has been achieved.

Before the Produce Run[edit | edit source]

To start the produce run, you must click the pink produce (プロデュース) button at the lower right part of the home screen, beside the purple Fes (フェス) button. This will lead you to a screen that shows the produce scenarios you can run. You can also turn on Hazuki's tips for W.I.N.G. by clicking the button beside the pink next button, then selecting what kind of idol you want to build. These tips will aid you in creating that specific Fes idol and will even provide you with optional missions that can aid you in achieving the desired idol, similar to true end training. Do note that the tips and optional missions are all in Japanese.

After selecting a produce scenario, you are then sent to the unit selection screen. This screen shows the units that you currently have (up to 10 units) and their compositions. A unit consists of 1 produce idol, which is at the left most part of the unit, and 5 support idols, one of which is a "guest" idol located at the rightmost part of the unit. This guest idol will not participate in auditions or lives but you will have access to their skill tree, support skills, and commus. In Fan Festival, the support idols have "idea icons" floating above their heads indicating what kinds of ideas they can give which are needed to fill up idea notes. You can toggle this on and off by clicking the idea display (アイデア表示) button. You can change the produce and support idols by click on their card icons above the idol's chibi models. You can also change the costume of the idols by clicking the chibi models themselves. Do note that only costumes obtained through costume tickets, the costume gacha, and uncapping P-SRs and P-SSRs to 4* can be used. You can also toggle between unawakened and awakened forms of the chibi models by clicking on the switch button below the produce idol's model.

The next screen after is the produce item selection. You can select up to two produce items to aid you in your produce runs. If you wish to change one of the items, press the clear (はずす) button beside the item to remove it, then select another item. See the item list for available items and which scenarios they can be used in. Pressing the pink button will ask you to confirm your choice of unit and items and shows that it costs 30 stamina to do a produce run. Press the pink button on the pop up to start the produce run.

Each idol has their own set of morning commus. Refer to the each individual idol's pages for their morning commus, as well as which answers can give perfect communication. Alternatively, you can bring a secret memo pad when selecting produce items before the start of the produce. This produce item reveals the answers and their effects not only for morning commus but also for produce/idol event commus and even pre-audition commus.

During morning commus and after fulfilling promises, there is a small chance that the memory appeal level will instantly max out at level 5 (level 3 for R cards). The chance of this occurring increases depending on the current trust level of the produce idol. The image below shows what happens after the instant max level event is triggered. 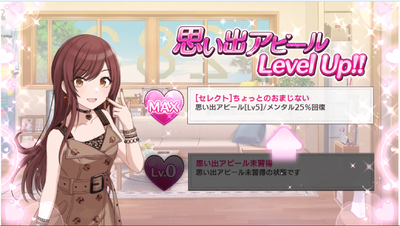 Similar to reporter events from the original THE IDOLM@STER series of games, occasionally a reporter will send a mail to you asking for an interview. You can accept or deny reporter requests; denying requests will not incur penalties. Should you choose to accept, on the next screen you can choose what topic the interview can focus on: Lessons (レッスン), Private Life (プライベート), or Work (仕事). The next screen will ask whether to accept the topic or think twice about it. Also, on this screen there are hints that can determine if you have a higher chance of getting a good reporter or not. Good reporters will give you positive buffs and bad reporters will give you negative effects. These effects last for three weeks.

Hazuki Events are similar to reporter events but have a much lower chance of appearing. However, Hazuki will only give strong positive buffs for your run with no downsides. She can appear anytime before the last four weeks of the final season. The buffs you get are dependent on the production scenario.

Retrieved from "https://shinycolors.wiki/w/index.php?title=Produce_Info&oldid=20612"
Categories:
Cookies help us deliver our services. By using our services, you agree to our use of cookies.