Landing Point, also known as 283 Productions' Unit-Solo Live Landing Point (283プロダクション ユニット単独ライブ Landing Point) is a Produce mode scenario that was introduced to the game in May 2021.

Landing Point is unlocked by completing the G.R.A.D. scenario at least once. As of January 2022, Only SHHis has no Landing Point scenario. 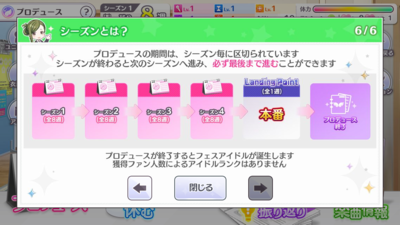 Supports now have proficiencies. Proficiencies allow the produce idol to gain bonuses when a specific proficiency gauge of a given song gets filled. There are five proficiencies, each corresponding to a particular stat. These are

Teamwork (SP). Each support card can have one or two proficiencies. The amount of proficiency points given by a specific card is dependent on the support card's level:

For the first three seasons, you get to pick a song. Upon picking a song, you are prompted to select a guest idol which can lend her proficiency points for that given song. Afterwards, you can now proceed with the produce run for that season.

Each song can be leveled up to 50, with milestone bonuses every 10 levels. These milestone rewards vary from song to song and can give bonus stats, or unit specific bonuses. Note that these unit specific bonuses are unusable in Fes Rehearsal, GradeFes or CollaboFes. Those will become useful for Fes Tours once it is implemented. Each song also has a specific set of missions that, when completed, can give bonuses while the produce run is ongoing.

Each of the three seasons have their own minimum song level requirements. Lvl 15 for Season 1, Lvl 20 for Season 2, and Lvl 25 for Season 3. Meeting these minimum levels at the end of each season can grant bonus fans, stats and increases tension, as well as recover stamina. Failing to do so will lower tension.

The fourth and final season plays similar to the first season, but with a few differences:

After all four seasons have passed, The Landing Point event begins. 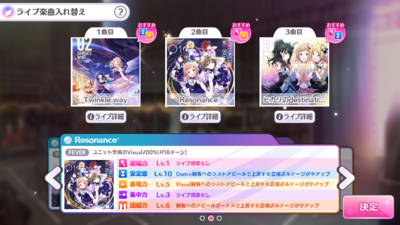 Before the home screen appears, a special screen will pop up (see above), showing the three songs you have selected. You can select and drag the songs to arrange the order by which the songs will be played. Each song also has it's own fever effects. A song's primary fever effect is dependent on the song, while the sub effects are dependent on how high each proficiency level of that particular song is. After pressing the pink confirm button, you will be taken back to the produce home screen. At this point you can only unlock skills or proceed with the Landing Point Event. 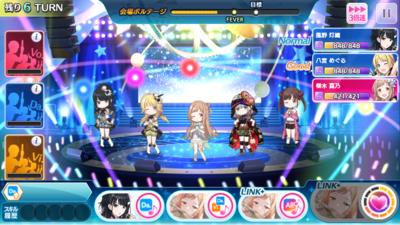 In Landing Point, the usual rivals are replaced with that produce idol's unitmates, and a gauge on top called "arena voltage". The goal of the landing point event is to fill up the arena voltage bar above certain thresholds per song. There are also fever thresholds wherein if reached, it will unlock fever time wherein the song's fever effects will be active for the unit. To fill up the voltage gauge, you and your unitmates must keep hitting the audience with appeals. When hitting certain audiences' appeal thresholds as well as dependent on the level of Focus and Teamwork proficiencies, the voltage gauge fills up by a certain amount. When the audiences' appeal meter gets filled, the voltage gauge fills up greatly. You have to reach the threshold within 6 turns or less so that the song can be cleared. After all three songs are played, depending on how many songs you cleared, your produce idol will gain a special bonus effect.

After the post-run commus are done, the post-run screens will appear as normal. Much like in previous produce modes, you can spend whatever SP you have left for passives and appeals. The post-awakening screen is also similar to previous produce modes, but this time, the fes idol produced will also have any bonuses unlocked from clearing song level thresholds during the run.

Retrieved from "https://shinycolors.wiki/w/index.php?title=Landing_Point&oldid=22925"
Category:
Cookies help us deliver our services. By using our services, you agree to our use of cookies.