The 283 Production Fan Festival ~Thanks Flapping Day!!~ (283プロダクション ファン感謝祭 ~Thanks Flapping Day!!~), also known as "TFD", is a produce scenario that was added into the game on April 1, 2019. The goal of TFD is to complete Idea Notes by collecting Ideas. Completing these Idea Notes can give bonus stats and affection to your idol and can help make your idol even stronger. While certain elements of TFD are similar to W.I.N.G., there are certain key differences between the two.

TFD has 4 seasons, with eight weeks each. Unlike W.I.N.G., there is no minimum fan count needed to advance from one season to the next. There are also two auditions, TFD rehearsal (which takes place between seasons 2 and 3) and TFD finals (taking place after season 4).

TFD has similarities with W.I.N.G., such as the general interface, the available lessons and work, and even the Skill Panels are unchanged. Support commus and unique idol events can also proc during the course of TFD. However, TFD has some notable differences in terms of both the gameplay and the interface. 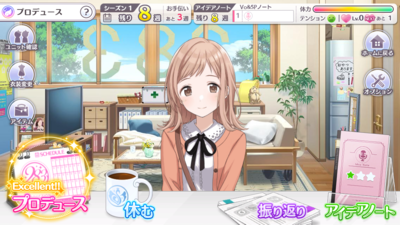 In addition, TFD has a different set of Produce Event commus compared to W.I.N.G., in which these explore further into the relationship between the unit members and the producer. There is one guaranteed Produce Event commu at the end of each season, with each giving a specific stat bonus, some Mental and SP—although in one of those commus, you can choose which stat you can take.

Finally, there are no True Ends in TFD, as these are exclusive to W.I.N.G.

While TFD does not have fan quotas, the stats gained from rooms are lower compared to W.I.N.G. To compensate for this, TFD uses a system of Ideas and Idea Notes.

Idea Notes are notebooks that can be filled from "Ideas", which in turn are obtained by training in a room with support idols. Each support card is assigned its own Idea icon.

There are five Ideas available:

When making your produce unit in TFD, you can see in the support selection screen the kind of Idea the support idol has below her card icon. The Idea icon is also shown on the produce unit page and the cards' own individual pages as well.

When you start a TFD run, or after completing an Idea, or if you start a week without an active Idea Note, you will be sent to the Idea Note screen (note: for the latter two, there will be a prompt that will remind you to set an Idea Note, press the pink button to continue to the idol note screen): 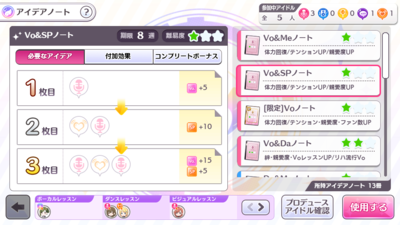 On the right side of the screen is a list of notebooks you can choose. When you choose a note, the requirements to clear the note and the base rewards can be seen on the wide space on the left. Below that is an indicator which lists down which supports are in what room. Once you have chosen the Idea Note, press the pink button on the bottom right (使用する). You can change incomplete Idea Notes at any time, but all progress will be lost, including the previous Note itself.

Each Idea Note has 3 pages that can be completed. The first page must be completed before progress can begin on the second, and second before the third. Completing pages along with the full Idea Note grants bonus stats and special buffs for your Produce run, and also increase your Affection Gauge that may potentially level up your Memory Appeal.

The amount of Affection Gauge and the number of weeks to complete it depends on the quality of the Idea Note:

You can fill up Idea Notes by going into lessons/work that has supports with one or more of the needed Ideas. If the Idea of a given idol satisfies one of the requirements of the current page, then it will take up a slot. Completing pages will earn you bonus stats.

One Idea can take up one slot per lesson/work.
For example, if a page requires two Vocal Ideas and the room only has one idol with a Vocal Idea, the Idea will only take the first Vocal Idea slot. But if there are two Vocal Ideas in a room, then both Ideas will fill up both slots.

Each Idea also has their own levels, depending on that support idol's bond. This is indicated by the number of arrows the Idea Note has. This determines how much bonus stats the Ideas can give once a page is completed. The table below shows the Idea level, the bond required and the bonus stats per level:

For more information about TFD stat gain, please refer to Pluie's guide at the right side.

You can obtain Idea Notes from Support Event commus (from support cards). Each support idol commu can give 1 Idea Note, though the specific note is random. You can also get 3 Idea Notes at the end of each season and by winning the TFD Rehearsal.

Helpers (お手伝い)—idol support cards that are not in your present unit—can be called upon to lend their Idea to the produce idol.

After a set number of weeks, a call can be made to any one of five supports chosen at random. Each of the five support cards represent each of the Idea types, but you can only choose one. This support idol starts with their base idol bond as determined by their current idol bond level. Furthermore, called supports will have the rest of their Support Skills and Skill Panels disabled. Also, once you've chosen a support card of an idol for the call, or if one of that idol's support cards is in the actual produce unit, the rest of that idol's support cards cannot be used for support calls. Finally, you can no longer do support calls during season 4 of TFD.

The screen should have a total of 11 helpers by the end of season 4.

There are no auditions in TFD aside from rehearsal and finals. Both work similar to auditions and Fes; but here, trends in TFD are not shown unless you are able to complete a note that allows you to see the trend. This effectively forces you to go in the audition without any Idea of who to hit. The best recourse is to focus fire on the judge whose stat you are building, and at least get a Last and Top Appeal on that judge, then try to last hit the rest of the judges.

At the end of TFD rehearsal and finals, you are then judged based on how well you did during the course of the audition. One or more messages can appear, which can correspond to bonus stats, more Idea Notes (in rehearsal), or TFD-Exclusive Skills (in finals).

After the finals and the last remaining commus, the post-run screen appears. This is similar to the post-run screen in W.I.N.G. and you can spend your remaining SP on skills. If you managed to get MVP during TFD Finals, you can see a set of 5 Live Skills/Passive Skills on the left. Some of these skills can have powerful effects, but some passives do require unique conditions for it to even have a chance to activate. 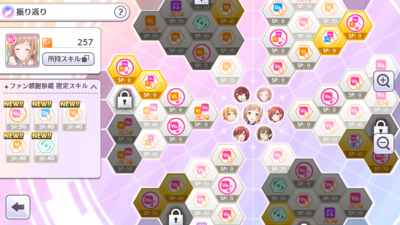 The rest of the post-run screens are similar to those of W.I.N.G.

Retrieved from "https://shinycolors.wiki/w/index.php?title=283_Fan_Festival_~Thanks_Flapping_Day~&oldid=23343"
Category:
Cookies help us deliver our services. By using our services, you agree to our use of cookies.